No Balls At The Library

My kids spent a weekend at Grandma & Grandpa's a few weeks ago, and my mom managed to dig up this gem from the 80's from her way back machine (aka the basement storage that also houses several yellow rotary phones).  Without further adieu I give you this pink Garfield plastic lunch box...I'm not sure if it was mine or my sister's - but in any event, it's an antique. 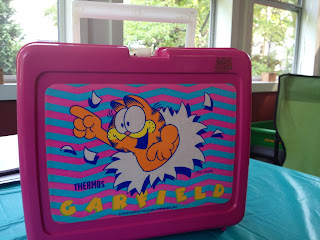 And the best part about it has to be the stickers on the back...the roller skate is my favorite... 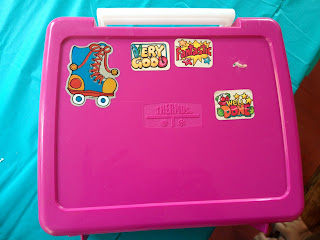 So of course the kids thought it was just awesome since they'd never seen anything like it before, and Ben decided to take it along home with him.  They basically like anything that is at someone else's house that is not theirs.  Which explains why he also wanted to take home all my mom's cat's toys.  You know...the little stuffed mice and little plastic balls with bells in the center.  So my mom, being the good sport that she is and giving her grandkiddies anything they want, packed up the cat toys into the Garfield lunchbox and sent 'em on home.  Ben and his pink lunchbox full of cat toys have been inseparable ever since.

Flash scene to a few days later -  We had decided to head to the library to return our lot of books for a new bunch, as well as 2 creepy ass, germ laden puppets that are available for "take out" at the library.  That's right - there is a bin of hand puppets available for the kids to take home for 2 weeks at a time.  Whose bright idea was that?  Course these things have been through the wringer and God knows when the last time they'd been disinfected was.  They have matted fur and loose eyes that look in several directions at once. And now my kids are obsessed with taking out new ones each time we go.  So we were heading into the library, Ben clutching his pink 80's lunchbox in one hand, and a rubber spider-man bouncy ball in the other, and I realized there was no way I could allow Ben to take a super bouncy ball into a library. The lunchbox was harmless, but the ball could do some damage.  As expected, he didn't take the news well when I told him we had to leave the ball in the car.  As the meltdown in the library parking lot ensued, I realized I'd have to resort to absurd measures.  So I gasped and pointed at the library entrance and said "Look at that sign!!"  Both kids stopped dead in their tracks and craned their little necks to see.  "What does it say mama?"  Lauren asked. "It says "NO BALLS IN THE LIBRARY" I told them, a concerned look on my face. It was so absurd that I couldn't even keep a straight face.  I had to hide my head in my hands for a second so I could laugh at myself.  But it worked.  Ben slowly handed me the spider-man ball...a look of awe on his little face.  Both looked from the "sign" to one another.  At the door they wanted to know which sign warned us about NO BALLS IN THE LIBRARY so I pointed to a random sign that said "no smoking". We get into the library, and Ben feels it's his duty to inform each person we come across that there are "NO BALLS IN THE LIBRARY!"  I suppose it was my own fault, but now I had a 3 year old screaming at everyone in the library that balls were not allowed.  Needless to say, we got some strange looks.  Best I could do was usher them into the kids room toward the bin of puppets, in hopes he'd become distracted trying to figure out which creepy puppet he was going to take home this week. Luckily my plan worked, and we found ourselves at the check-out desk with a pig and a duck puppet. As we were waiting in line - a few people in front of us - Ben & Lauren were passing the lunchbox back and forth when it opened up and the cat toys spilled out all over the place.  The little belled balls rolled every which way.  Tiny stuffed mice spilled out onto the floor.  Everyone looked on...obviously confused.  Lauren, Ben & I chased the cat balls trying to round them up before anyone tripped.  Ben screaming "No Balls, Mama!  You take balls in the library, Mama!"

...and this is what it's come to.  Chasing cat toys that fell out of my son's pink 80's Garfield lunchbox around the library while my kids scream "No Balls at the Library.." Serenity. Now.

Next on the agenda for me will be sneaking in the kids rooms tonite - "Mom Ninja" style - in an attempt to pry the creepy ass, germ laden puppets from their little baby grasps while they sleep, and make those things disappear back to the library before they notice their gone.  That way we can hopefully avoid the automatic puppet exchange next time we go to the library.  In fact, I think it's time to find a new library altogether...after the lunchbox/balls incident, I'm thinking it's time for a change.