No Soliciting (Unless You're Selling Wine)

May is here, thus marking the beginning of "door to door soliciting season".  Yes, in this day and age - people still show up at our doors at dinnertime attempting to give us a free estimate on new siding (which we don't have, by the way..), trying to get us to switch cable providers, invite us to various religious events where we should "bring our own snake", sell us a security system, or get us to vote "yes" on question 3.   This annoys me to no end.  I feel like it's completely ridiculous to expect people to open their doors and have these absurd conversations - it's a total infringement on privacy, and really - who the hell are these people?  And so last summer I put up a sign on the front mailbox that read "NO SOLICITING"...and guess what?  People still came to my door!  Yep, I actually had someone say "But I'm not trying to sell anything, I'm only offering a free estimate.."   And of course it totally doesn't apply to the religious crew who is only selling redemption (3 sins forgiven for only $19.95!)  Don't get me wrong - I'm in no way bashing any religious organization - I just don't appreciate the door-to-door-conversion thing.

So I figured I'd start letting Brynn - my 200 lb.  English Mastiff - answer the door.  She gets really excited when someone comes to the door...so she & I put that to good use.  I open the door, attempting to hold Brynn back, and usually do a dramatic trip where I "lose the grip" on her collar so it looks like I have no control over the beast that lives in my home.  She looks mammoth at the door, and nobody is expecting to see that greet them at the door.  As she snorts and paws uncontrollably at the screen door, I try to get in front of her, only to let her push me back with her family sized head.  Standing behind the Mastiff, I lean over her - being tossed about dramatically, I hold on to the door frame to steady myself, and yell over the snorting, "She hasn't eaten lunch yet....I can't open the door - sorry!"  At which point, the solicitor has no interest whatsoever in giving me a free estimate on anything.  They put their little brochure in my mailbox and scurry off, looking back over their shoulder to make sure the brindle beast hasn't broken out the door to come after them.  (Insert evil laugh here).  The religious folks back off wide-eyed, sometimes clutching their chests in horror when I yell to the dog "Down, Satan, Down!"  Yes, soliciting season is here, and we're looking forward to it :) 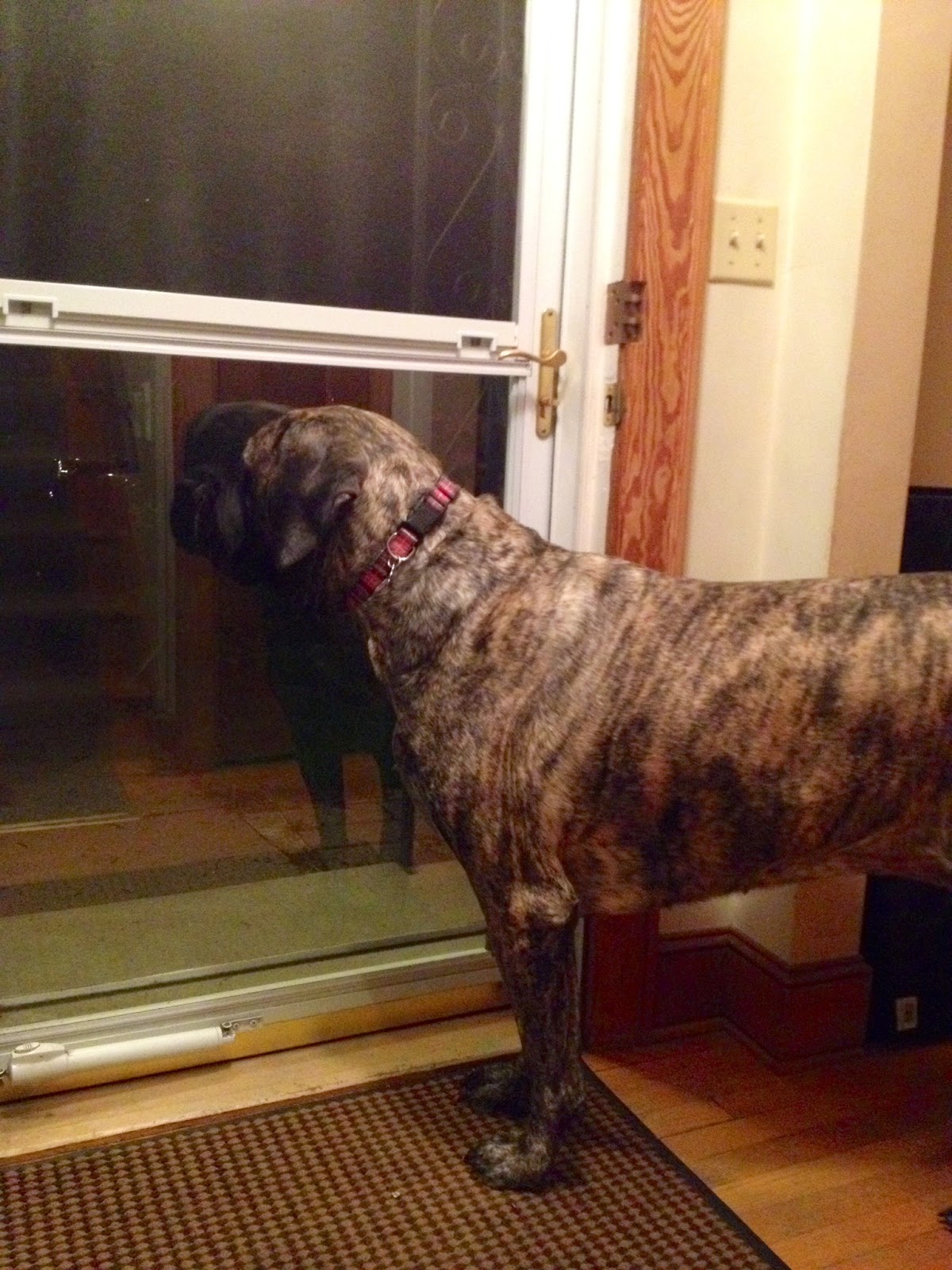 In other news, Ben started soccer last week, and his team shirt color is pink.  I must say, this kid can totally pull off the pink.  He owns it. 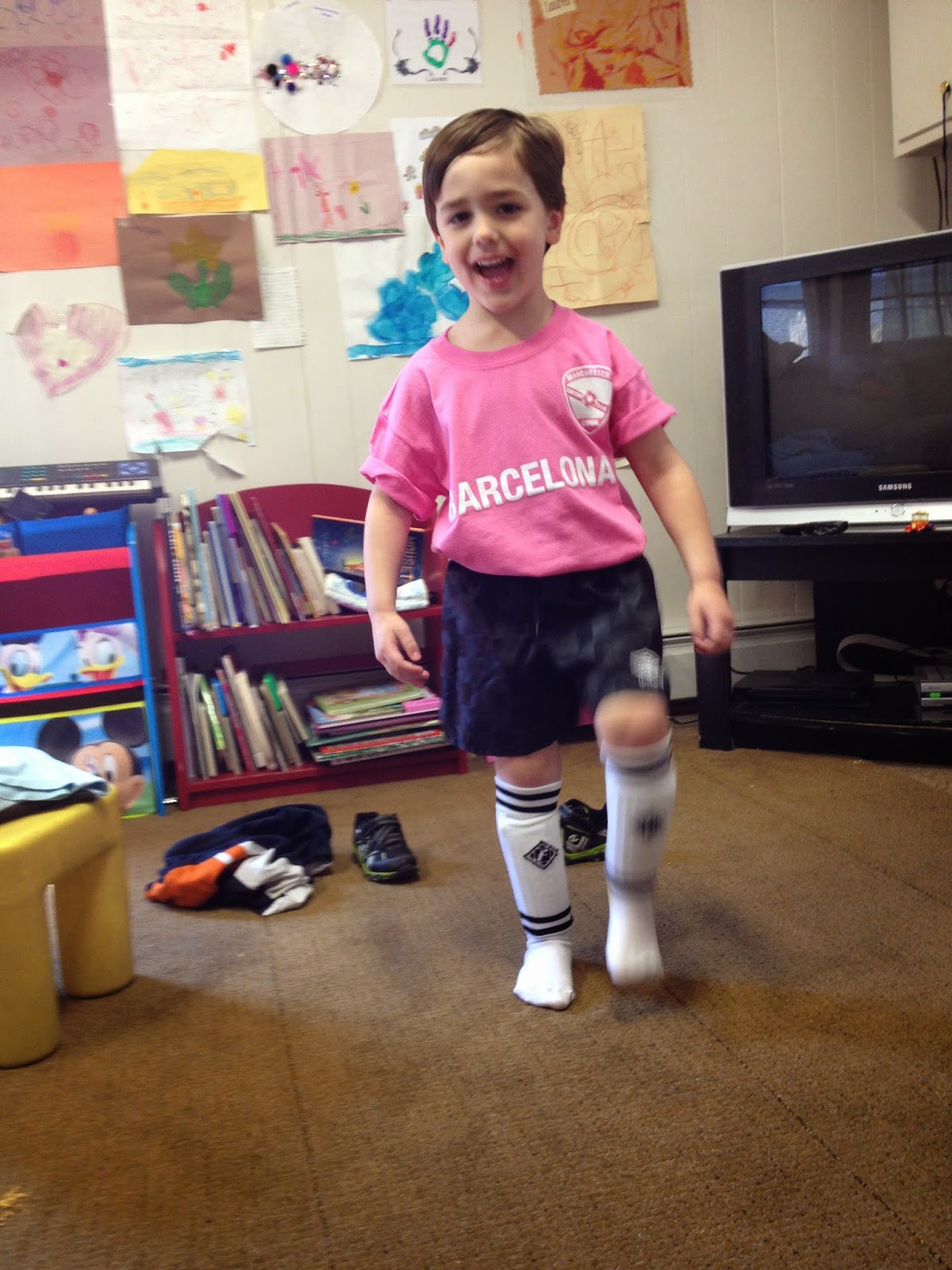 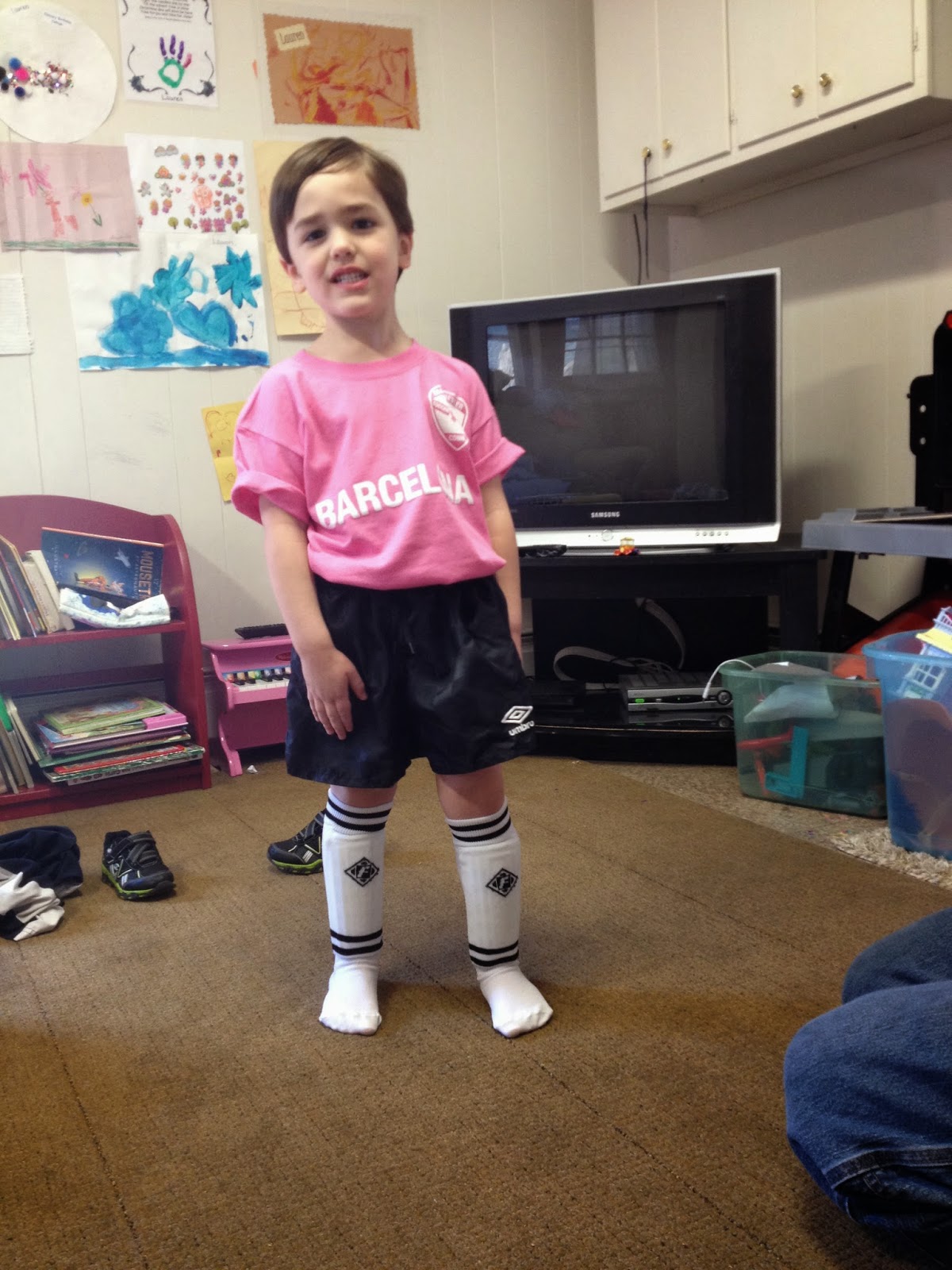 We're walking across the soccer practice field looking for his team - there were literally hundreds of people coming and going - and some little boy comes running up to Ben and says "Hey Ben!"  And Ben says "Hey" with a cool head nod and keeps walking.  Brian & I look at each other quizzically as if to say "how does 4 year old Ben know random people??"  So I ask Ben how he knew that little boy and nonchalantly he says..."From the gym".   Oh of course!  I can only assume he means the gym daycare, where I put him the mornings I go.  But of course, this is Ben - for all we know he has his own gym membership and is training for a Tough Mudder or Warrior Dash.  The kid's like Ferris Bueller...he just has that way about him.  He's very charismatic, makes friends quite easily, and is quite the flirt with the women.  Expect to see him on TV singing a top a parade float one day when he skips Kindergarten.

And my sweet baby girl Lauren Allison....I just registered her for Kindergarten for September.  No, no no....I don't even know how that's possible!


People say it goes so fast...and it really does.  Of course, it didn't seem that way when they were both babies.  Lauren was only 15 months when Ben was born, and I remember bringing him home from the hospital and Lauren staring at him like "What IS this??"  I think she thought we got a new cat at first.  She was too young to comprehend the whole sibling thing. 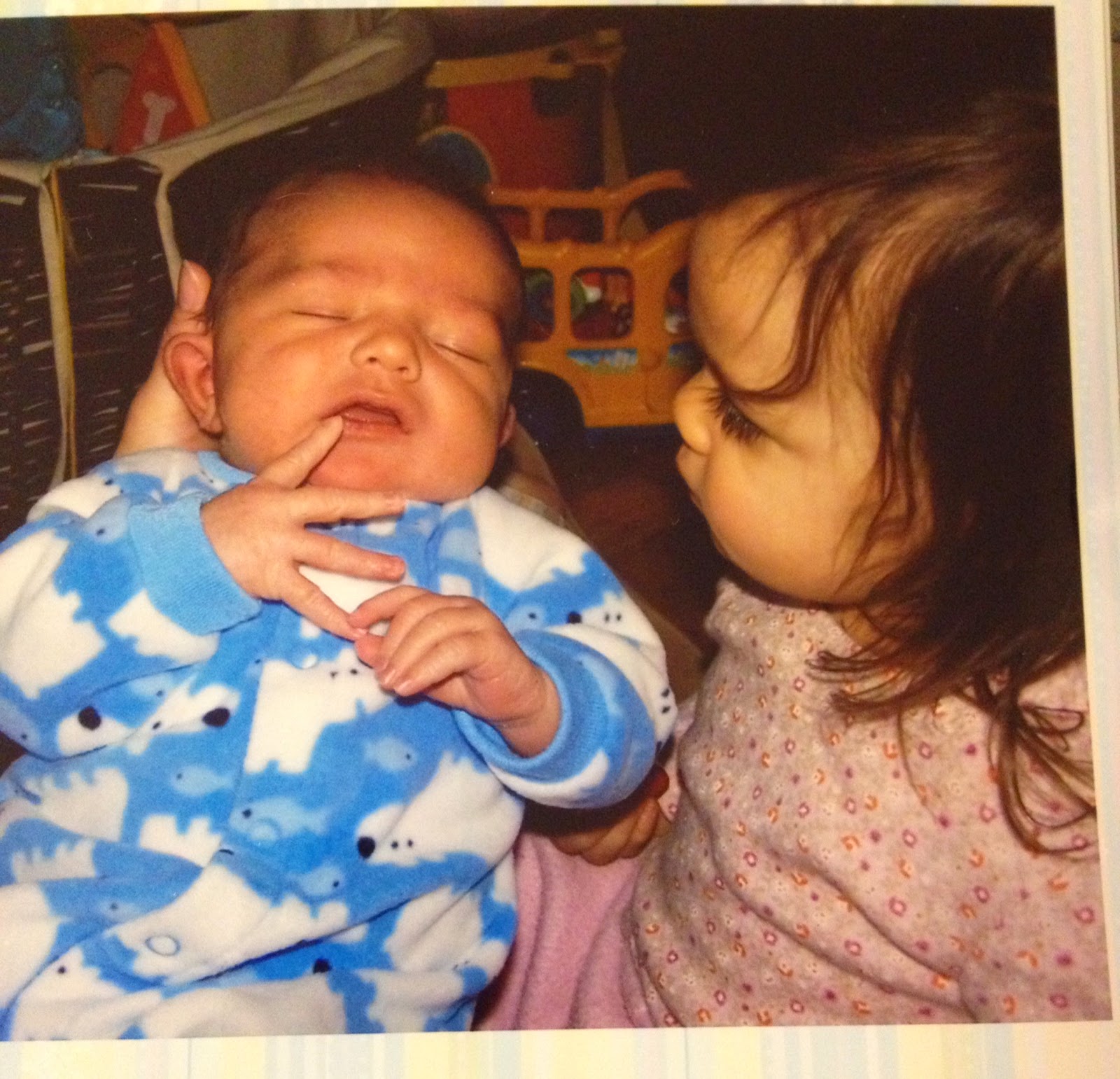 I remember the day that Brian went back to work and it was just me and the toddling 15 month old and a REALLY hungry Benjamin that needed to eat every 20 minutes.  I literally thought "What the hell have we done???"  I had 2 babies under 2, and started to wonder if anyone had ever successfully made it through those early days while maintaining sanity?  I googled things like "2 under 2 HELP!"  and read forums where other mom's had actually done it and survived....and just as soon as I felt like I had a handle on 2 babies....Ben started in with Colic.  Unless you've had a baby with Colic...you just can't appreciate the noise that goes along with it.  At about 3 weeks old, he started screaming and crying every day at 3pm.  He'd scream clear through until 8pm, and there was no consoling him.  Brian & I would pass him back and forth and take turns eating and give our ears a break, but there was nothing we could do to calm him down.  The pediatrician told us this was very common, and should subside by the time he was 12 weeks old.  WHAT?????  I was convinced there was no way we'd survive 9 weeks of that.  But somehow, we did.  By 10 weeks he was only screaming for 3 hours a day, and at 11 weeks it just stopped as abruptly as it came on.  But let me tell you, THAT didn't go fast!  No...and when people told me it would, I wanted to cry then shove a pie in their face.  Of course now...in hindsight it did.  And here we are - one going off to Kindergarten and the other running for public office at 4 :)


Enjoy your weekend!  And if you insist on soliciting at my door, please bring wine!
Posted by Melissa at 11:03 AM