Gone To The Dogs

Summer is coming to an end, and it's a big ol' circus sideshow over here.  I have a lovable but belligerent 200 pound mastiff who refuses to have her nails trimmed. 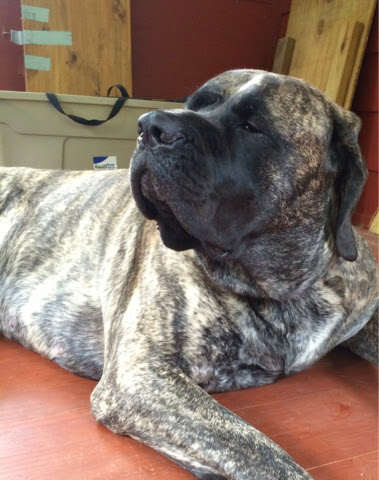 When I'm feeling brave, I'll sometimes lock myself in the bathroom with her and back her into a corner in an attempt to clip the talons, but it's a lengthy process with her pulling her paw away the second I get the clipper around her nail.  Usually - if I'm lucky, I'll get 2 or 3 nails partially clipped before all hell breaks loose.  I have to get on top of her -on her back - and when she decides she's had enough, she stands up and bucks me off of her like one of those bull rides you see at a country bar.  I then run the risk of being trampeled so I have to get myself to high ground pretty quickly, so I jump on the side of the bathtub and hang on to the shower curtain rod to steady myself.  By this point Brynn's tail in wagging wildly as she tries to seek shelter in the 6 inch space behind the toilet.  By this time, the commotion has drawn the kids to the bathroom and they pound on the door and try to open it.  I have no choice but to scream the emergency "safe word" to Brian to come and save the day - which is "Tarragon Chicken".

So I finally decided to consult a professional groomer.  I should've known when I called and asked if their doggie salon had experience with "large breed dogs"  and they assured me yes, they've groomed plenty of dogs over 75 pounds, that maybe they werent equipped to handle Brynn.  When I informed them that she was actually close to 200 pounds, there was a pregnant pause followed by what I'm pretty sure was the phone dropping, and then a tentative "can you bring her in tomorrow at noon?" So I made the appointment and the next day collected Brynn and we headed to the groomer.  The owner, who I have to imagine has seen her share of dogs of all shapes and sizes, looked truly shocked when she laid eyes on Brynn.  I assured her that Brynn was friendly and that she'd already eaten lunch, so she needn't worry.  I'm pretty sure she wasn't amused.  Neither was Brynn.  So at 12:01 we left Brynn at the groomer who told me she'd call me in about an hour when Brynn was done.  At 12:03 my phone rang, and it was a shaky voiced groomer who said "this isn't going to work".  Luckily I had just pulled out of the parking lot, so was able to turn around and get back there pronto.  As I pulled in, I played out the scene in my mind of what may have happened in that 120 seconds I was gone.  I envisioned tables overturned, grooming sheers flying through the air, people running in every direction seeking cover as they scream "Run for your liiiiiiiiife!!!"  Like a scene from Godzilla.  I wondered if the salon had insurance.  Luckily it wasn't that bad....just a few people hiding under tables as Brynn snacked on what I believe was a yorkie.  Just kidding.  Brynn stood at the door waiting for me with a look on her face that said "Don't try this again."  The groomer was apologetic, and I think she'd just truly never seen anything like Brynn before and was intimidated by her bigness. My poor girl...so sweet and misunderstood.  And powerful and belligerent.  I couldn't love her any more if she was a human child, though.  She's my baby and she's been such a loyal, awesome family pup.  So what if she turned that grooming salon upside down... 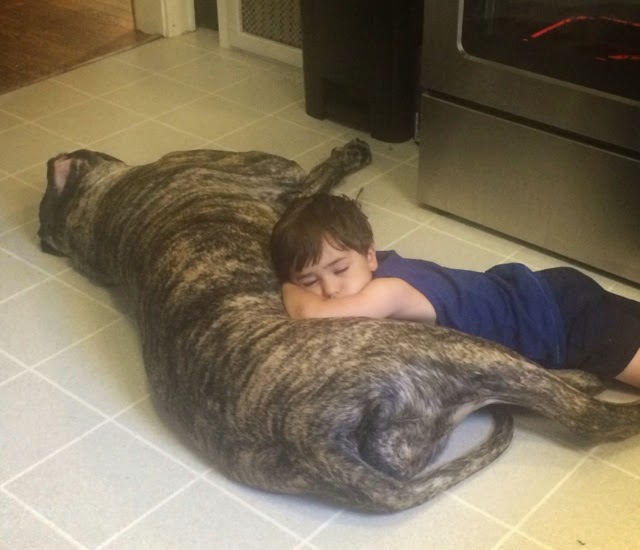 Anyway, if you're a dog person who thinks you may be able to tame the beast long enough to clip her nails, please contact me.  If you're name is Cesar Milan, even better.  Whisper to my dog....do whatever it is you need to do to get this dog's nails clipped before they get so long that I have to register them as lethal weapons.

On the topic of the mini zoo - we recently welcomed 2 new beta fish to the family - Dory and Heart. 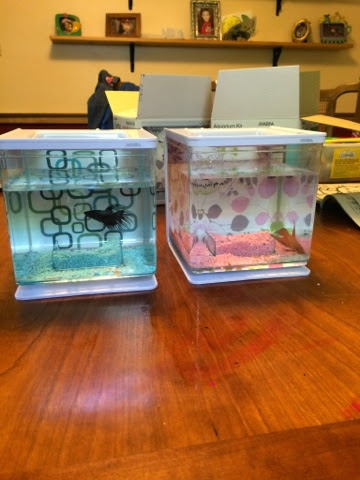 Last week, Heart (Lauren's fish) went off to the big fishbowl in the sky (insert flushing toilet noise here).  Brian & I had 2 options at that point... 1) Tell Lauren and let the passing of her little fish serve as some sort of life lesson that sometimes we have no control and things like this happen....circle of life and all that.   Or B) Distract Lauren from the floating fish in the tank while one of us ran down to Pet Supplies and bought a Heart look alike.  Meet Heart 2... 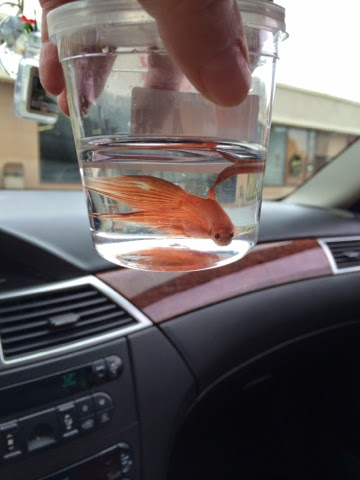 We swapped out Heart 1 for Heart 2 and she was none the wiser :)  Mission Emergency Fish Replacement was a success.  The things we do to save our little ones from any kind of heartache.

Last but certainly NOT least, I have a HUGE, gigantic, monumental favor to ask of anyone reading this blog.  Ok, so as you know...animals are near and dear to my heart and if I could, I would take in every animal...cat, dog, squirrel, racoon, etc...that was in need of a loving home.  I'd then be featured on that show "Hoarders" and my home would be condemned, so I realize there are better options to help :)  There are 3 dogs that need our help...I'm asking that you read their story below then click on the link and donate ANY amount of money to help.  No amount is too small.  Thank you in advance to any kind hearted soul out there that takes the time to help these 3.... 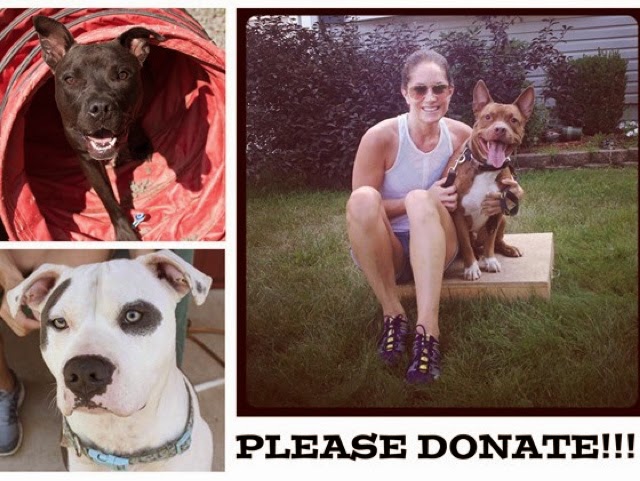 To make a very long story short... Rufus, Petey and Reese were all pulled in early 2014 by Ruff Start Rescue NY. Since they were pulled they have passed around between boarding, fosters and adopters. Ruff Start stopped supporting them, along with many other dogs, many months ago.

A group of volunteers along with 501c3 Stewie to the Rescue have banded together to place these dogs.

The three left are in training. Rufus and Petey (formerly Ferdinand) are at True Companion in Pennsylvania. Reese has been living with a trainer and will be headed to TC as well in a couple weeks.

Due to the instability these poor boys have suffered - They need the training and we are networking/posting them for appropriate homes. These are all GREAT guys that need experienced owners, and we are working hard to find them just that.

Please help us by supporting their training fund. We will owe more than $1500 in September.  - See more at:

Turning 30 isn't the only big change happening around here.  The kids will both be starting school - Lauren will be going to Kindergarten and Ben will be going to preschool.  Lauren will be going to FULL DAY Kindergarten and I'm finding it hard to wrap my head around that.  She went to preschool last year - 3 hours a day, 3 days per week (the same program Ben will be doing this year).  It's quite a leap to go from that to full day school 5 days a week.  My little girl is growing up and starting a new chapter in her life.  I mean, she's very excited about it all - we all are.  But to me, who has been home with her since she was a baby -  It feels like she's heading off to fashion design school in New York City and moving into an art loft with a like-minded roommate named Pierre.  Next thing I know, she'll want to do a year abroad in Paris where she'll wear colorful berets and eat croissants and decide to change the spelling of her name to Lauryn.  Damn you, Pierre...damn you!  I knew that kid was a bad influence with his french accent and skinny jeans.  Ok, Ok...I see I've gotten a little carried away. Clearly Mommy needs some extra Xanax.

Anyway, Lauren starts school at the end of August & Ben will be starting the second week of September.  I will also be starting my 200 hour Yoga Teacher Training - YAY!!  It's something I've wanted to do a for a while and the timing works out great.  I'm finding that as my children grow and enter new chapters of their lives,  those are the times I tend to reinvent myself.   I almost don't realize it's happening, but that seems to have been a consistent pattern over the years.  Sometimes in small ways, even...but it's definitely been a theme for me.

In other news, in my last blog I told you that my house may be haunted.  Well no more strange occurrences have happened, and remember how I told you I lost my car keys somewhere between my car in the driveway and my house?  Well like a week later my neighbor, Tracy, who lives across the street from me sent me a text asking me if the keys I lost were Nissan keys.  Turns out they were in her front yard.  Obviously....why hadn't I looked there? (I jest).  There's just no reasonable explanation as to how my keys ended up in her front yard.  Let's say I dropped them in my driveway and I didn't realize...they were far too heavy for wind to have blown them over there.  Then I wonder if maybe someone....maybe the mailman or someone walking by, saw them in my driveway.  But why would they take the keys out of my driveway only to throw them across the street into my neighbors front yard?  I don't know...it's strange for sure, but the only logical explanation here is that there's some kind of a portal...from the key holder in my kitchen that leads straight to Tracy's front yard.  Kind of like in the movie "Being John Malkovich" where the portal behind the file cabinet leads into his mind and then after 15 minutes spits the person out onto the side of the New Jersey Turnpike.  So next time I'm missing my Chapstick or something, the first place I'll check is Tracy's front yard.

So that's a relief - no haunting.  Just a portal.

Lastly, I've gone Gluten Free again.  I always just feel better when I'm not eating gluten.  Plus, now there's tons of awesome gluten free products on the market now that they didn't have a few years ago when I first decided to ditch the gluten.  It's really a lot easier now, and I'm noticing a lot more products are actually labeled gluten free so that you don't have to look up the 20 different ingredients a product contains to figure out if any of them is code for GLUTEN.  Here's my latest gluten free find (thanks to a tip from an awesome Naturopath I see) and it totally rocks.  It's called Chebe Pizza Crust Mix and it makes a kick a$$  pizza crust that you'd never know was gluten free.  This entire pizza is gluten free and it was yummy and didn't make me feel like I was missing out on anything. 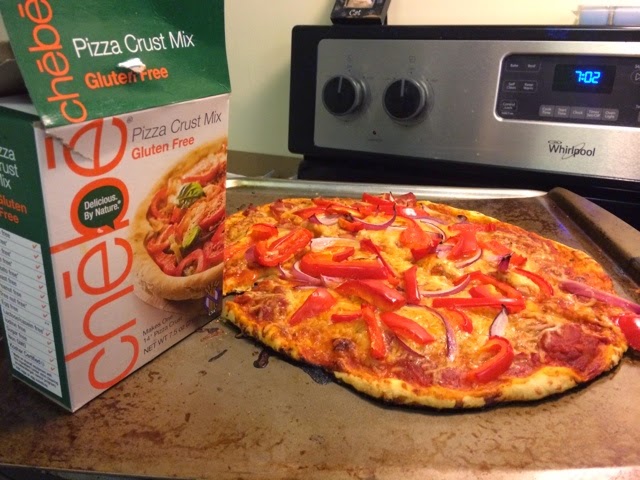 And on that note, I'm off to search Tracy's front yard for my sanity...it's been missing for quite some time now.