Ok, so here's where I'm at:  I have 2 sick kids who have had a fever since Sunday. It's now Thursday. (I just had to check my calendar to make sure that it is indeed, Thursday....this is like the Bermuda Triangle of cabin fever.)  They turned the corner yesterday and are feeling much better today, but still not 100%.  We've been stuck in the house since Sunday.  4 DAYS, people.   I'm losing my mind!!  I'm following this Malaysian Jet mystery like it's a soap opera and obsessively tracking my Amazon.com order of the movie Frozen waiting for that bugger to show up because I can't watch one more episode of Doc McStuffin's patching up a talking inanimate object while her little diva sidekick Lambie whines because she doesn't feel special anymore & starts acting out passive aggressively.  Maybe Doc's parents need to start paying a little more attention to her stuffed animal medical clinic before Doc has a psychotic break and starts operating on neighborhood kids.

To add a kicker to the feeling that I'm in the movie Groundhog Day and reliving the same day over and over...today is the first day of "Spring".  I use the term loosely since it feels the same as any other January day. Ok,ok -that's a bit dramatic....maybe more like early February.  "Spring"....pffffffft!   If by "Spring" you mean dead grass, baron wilted trees that may or may not ever bloom EVER again, and temps in the 30's...then yes, it's Spring. Indeed, "Spring has Sprung".  Put on your winter coats & earmuffs....Spring is here.  I've NEVER - in my 29 years on this earth - EVER seen anything like this never ending winter!!! 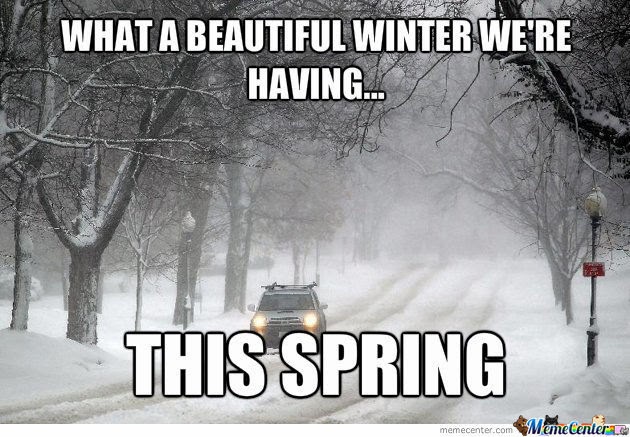 In an effort to shake things up, I've just filled out my college basketball bracket for March Madness.  I have no idea whatsoever what I'm doing, nor do I have any clue who any of these teams are, but I needed a distraction.  I picked the teams based on random things like...which place would I like to visit more than the other, or if I know someone who knows someone who went to one of the schools.  When in doubt, I just picked in alphabetical order.  Very scientific.  Who knows, I may even start watching the actual games. When's kickoff??

Next I may sign up at the University of Phoenix Online and get a doctorate degree in Anthropology or Cardiology.  One of the "ology's" for sure.  Ferretology?  I definitely don't need one in meteorology...no, no need for weatherman degree when I can already predict it will be Winter forever.  And on that note...I'm off to grease up the old snowboard in anticipation for the next snowfall.   Happy "Spring"!!!
Posted by Melissa at 5:00 PM No comments:

It's the middle of March and Spring has forgotten to come.  One day last week everyone got all excited when it hit 64 degrees and we all ditched our winter coats for short sleeves & fruity drinks with little unbrellas in them and headed to the park or beach, only to have our little hopes dashed the following day when the mercury plummeted down to a frigid 15 degrees.  Wind chills were in the single digits that day, and there was talk of a possible snowstorm on the horizon. What the....???? 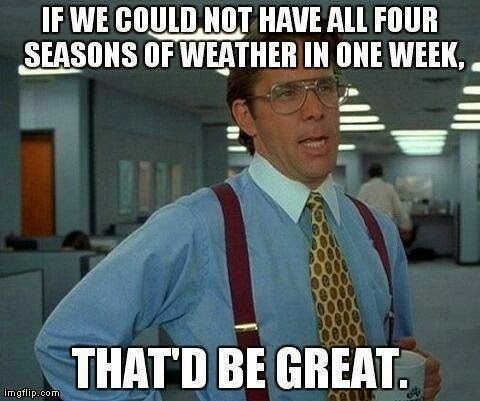 Meanwhile, this being couped up indoors has really affected all of us - and to top it off, it's a full moon today.  I really do think it has an affect on people & animals...as evidenced by the fact that my dog, Brynn, starts acting really strange a few days before a full moon.  She gets very unsettled and paces around from window to window, barking randomly.  I've been having the most bizarre dreams, too.  The other night I dreamt I was walking into church on Christmas Eve, and the church was decorated really pretty and everyone was all dressed up and singing, and I'm a half hour late coming in and I have on pajamas.  So I go in and try to sit way in the back so nobody will notice me but I'm a total mess and slowly people start noticing. As is often the case with such dreams, there's no backstory as to why I'm parading around town on Christmas Eve with my PJ's on and what would posses me to go to church in such attire, but there I was.  Suddenly this couple sitting beside me decides in a grand jester to have some sort of impromptu wedding ceremony, so the pastor comes over to perform this ceremony and of course every single person in the church turns their attention to these people beside me and there I am standing there with my Hello Kitty PJ's on, slippers and my hair up in one of those buns on the top of my head like Pebbles from the Flintstones.  Yes, full moon fun.  (Paging Dr. Freud...)

Ben (4) has been a bit of a terror these last few days, too.  He was acting up so badly at the grocery store that I actually told him that someone in the produce dept had called the police and if they came and saw Ben misbehaving that they'd arrest him.  He's probably scarred for life now, but it did the trick.  Every once in a while I'd throw out there that I thought I saw a police cruiser pull up in front of the store...just to keep him on his toes.  He sat in the grocery carriage wide eyed and quiet for the remainder of the trip.
Mommy - 1, Ben - 0

You know when you're out in public and you're child isn't listening, and you don't want to cause a scene, so you plaster that fake smile on and tell your child in that forced calm, high pitched voice "Come on, honey...let's go" when you're trying to leave a store or get him to walk away from the toy aisle?  And after like the 3rd "Ok Sweetie, we really have to go.." and he totally ignores you, you have to step it up a notch -but still come across to passerby's like your calm and cool and you've got this.  So then your voice drops a few octives and the wording gets a little shorter..."Honey, let's GO!!" and you do that a few times, then the smile fades and you drop the niceties and leave out the "honey" part and it's "LETS GO!"  And really, the child's hasn't heard anything until that last demand, anyway so all the other polite requests were in vain.  I'm going to step up and admit it- all I really want to say is "Hurry the fuck up!!!"  "Let's fucking GO!"  Admit it, it's what we're all thinking but can never say.  It's what makes us a civilized society - those smiles and polite high pitched requests.  Keeping the F words out of the grocery stores and libraries.  But we all know what the other parent is thinking...it's like parent code...when you see the mom in the minivan parked next to you in the mall parking lot trying to get her kids to get in a put their seatbelts on...you give her that little knowing smirk.  Because one of these times...someone, somewhere is going to get really frustrated and slip up, and scream at their kids in the preschool pick up parking lot...to get the fuck in the car.  And most likely...it will be during a full moon...