Well, I did it (Cue the Dora song after they cross Chocolate River and make it to Magic Mountain...)
I've started my container garden in my screened porch and I've managed to A) Keep the plants alive for a WHOLE week now! and B)  Plant itty bitty seeds in pots and they are actually starting to grow!  Did you hear that, people?  They. Are. Growing. Hi, I'm Melissa and I can work magic.  It's almost like I didn't really believe that anything would happen when I planted seeds in the dirt and watered them.  Like it only worked for people who knew what words like "harvest" and "soil" meant. 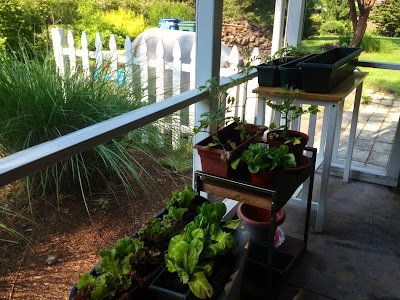 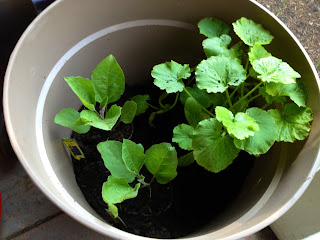 This is exciting on several levels.  First and foremost - I can now join the ranks of those who run around in big floppy sun hats and floral print gardening gloves who say things like "I need to get some gardening done this weekend" with a pained look of obligation on my face as I stare up into the bright sun and wipe sweat from my furrowed brow.  No one knows exactly what I'll be doing, but I'll tell you what - they won't ask any questions.  Nobody questions someone in a floppy sun hat who runs around making bold statements like that.

Second, I have actually followed through with one of my small goals that I made months ago.  This is kind of a big deal considering most of the time it's difficult to follow through with the simplest of tasks.  Something as simple as say....folding a load of laundry can turn into a full blow fiasco when you have 2 kids who are hell bent on keeping you from doing anything productive by doing things like sprinkling a vat of glitter in each others hair then painting the dog's tail yellow with finger paint.

In any event...having goals is good....next up for me: convincing Brian it's a good idea to foster dogs for the Doberman Rescue  ;)
Posted by Melissa at 1:13 PM